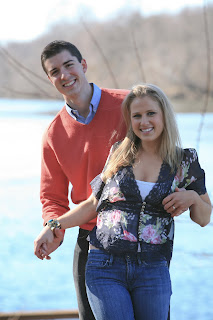 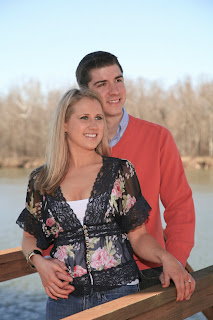 We had the pleasure of photographing Lauren and Justin at the Virginia Power Boat Association. Even though it was chilly and windy, the background along the water made a beautiful portrait backdrop. There was even time for some play on the swings and a log.
Lauren and Justin met each other in college. After four years of college and dating, they both went in opposite directions.
After two years of being apart, Justin was transferred to the same area as Lauren lived. He didn't hesitate to give her a call and ask her for a date. It was as if they had never been away from each other.
A year later he popped the question. We look forward to photographing their wedding story in August 2010. 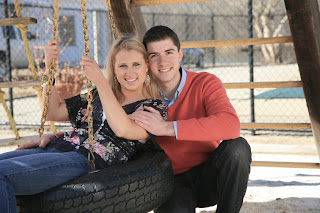 Posted by Miller Photography Inc. at 1:24 PM No comments:

When Did the Tradition of Wedding Cakes Begin? Article 2 of 2 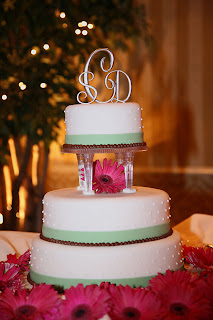 The color of white became very prevalent during the Victorian Age. White denoted purity and a bride dressed in white stood out among the wedding guests. It was at this time, too, that white-iced wedding cakes became popular and had more meaning.
During this period of time it was very difficult to find the ingredients for icing, much less the refined sugar that made the icing really white. The richer the families, the whiter the icing on the wedding cake.
Sugar was in very short supply during World War II in Great Britiain. Wedding cakes became smaller, or, for the poorer families, fake cakes were created out of plastic of Paris.
Multi-tierred cakes that are so common today were reserved only for English royalty. The only problem was that the pillars we see holding today's layered cakes had not been created. This meant that the first layer of the wedding cake was real, but the following layers were made of spun sugar so that the top layers would not collapse onto the bottom layers. The three-tiered cake is believed to be inspired by the steeple of Saint Bride's Church, London, England.
The tradition of the couple cutting the wedding cake still exists today. The custom was originally given to the bride so that she could cut the cake to give a piece to each of the wedding guests. It symbolized her first task as a new wife. As the guest lists grew, it became more and more difficult for the bride to cut the cake for everyone. 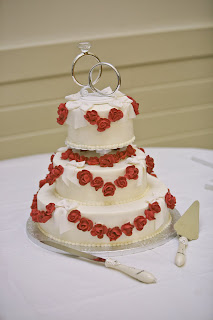 Later on the bride and groom cut the cake together symbolizing unity, their shared future, and their lives coming together as one. It was also a symbol of the groom's willingness to help out in the future. Feeding the cake to each other showed joint commitment to provide for one another.
Another old English wedding cake tradition was to throw a plate of wedding cake out the window the first time the bride visited her family's home. If the plate broke, she could expect many years of wedded bliss. But, if the plate didn't break it was a symbol of a grim future.
The tradition of not cutting the top layer started in the 19th century when cakes were made for christenings. Since there was no birth control during this period of time, it was considered the duty of the bride/wife to bear children. For this reason, the top layer was not cut so that it would be available for the christening that was sure to follow the wedding.
Today's wedding cakes or cupcakes have no limits. Even though many of the yesteryear traditions still remain, wedding cakes can be made to tower high above the couple, be brightly colored, have various types of icing, be shaped in designs that are only limited to the imagination of the creator, contain flowers or crystals. Contemporary wedding cakes often reflect the inviduality of the couple, their hobbies, or their lifestyle.

It is unclear as to where the act of smashing the wedding cake into each other's faces began. One thought is that it was started by a bridegroom who secretly held hostility towards his wife. He thought it would be funny to publicly embarrass her in front of the guests. Many think it is a sign of disrespect for each other, especially when one understands that the tradition of cutting the cake was created as a symbol of sharing, feeding, and taking care of each other.

Cake photos used in this article were created by Cakes by Graham (http://www.cakesbygraham.com/) and A Cake to Remember (http://www.acaketoremember.com/), respectively.